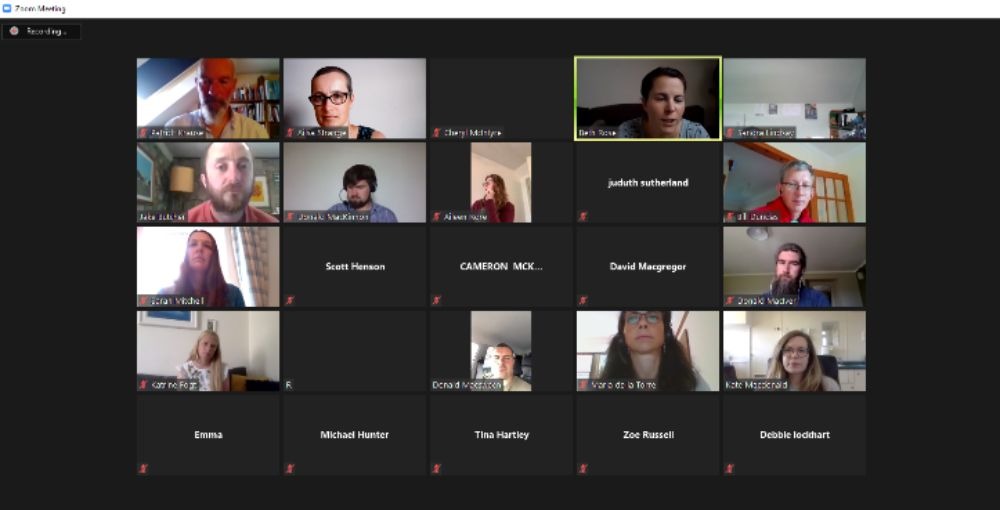 Access to land was highlighted as an obstacle at an on-line event hosted by the Scottish Crofting Federation’s young crofters. The event showcased croft-work, aspirations and concerns of young crofters.

The day was chaired by young crofter, Donald MacKinnon, SCF’s vice-chair , who said

”We had a great gathering with over 60 people participating. The video presentations made by young crofters showing us their enterprises were very inspiring and the discussions that followed were vibrant and illuminating. We covered topics including local food, horticulture, direct selling of meat and other products and the Scottish Crofting Produce Mark. The lack of available land kept coming up and is clearly a major obstacle for young folk wanting to get into crofting.”

“Fergus Ewing, cabinet secretary for rural economy, addressed the gathering and we concluded the day with a very interesting session where panel members from Scottish Government, Crofting Commission, SNH, SAC and SCF gave their views on the big picture, the main issues for crofting. This led to many questions and discussion covering hot topics such as access to land, croft housing, local food supply, peatland management, climate change, control of geese – too many questions in fact for the time available. Lack of access to land is a key issue and it was heartening to hear Rod Mackenzie, convener of the Crofting Commission, also state this as a priority of the commissioners.

“Time ran out, but this gave me a chance to close the session with ‘to be continued’, and it will be. We intend to hold regular online gatherings for younger folk, drilling in on specific topic areas. Access to land will be high up there.

“We closed with informing the gathering that we will be taking nominations for the Euan MacRae memorial cup for ‘Best newcomer to crofting’, and for ‘Young crofter of the year’ from the beginning of September to mid-October, with the awards presented towards the end of the year.

“We didn’t know how this would go, as it was our first attempt at holding a full gathering online,” Donald concluded, “but video-conferencing technology has come a long way and we were able to get people together from all over, be shown around crofts, survey participants, have panel discussions and much more. A recording of the gathering will be up on our YouTube channel soon. This is certainly to be continued!”